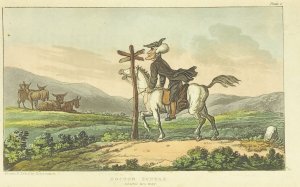 Who is the world’s first cartoon character, the ultimate ancestor of everyone from Superman to Popeye?

It is generally agreed that the honour goes to Dr Syntax, created by the artist Thomas Rowlandson and the writer William Combe in 1809. The direct inspiration for Syntax was a skeletal priest, the Reverend Ralph Baron, whom Rowlandson had seen deliver a dull sermon in St Breward’s Church in Cornwall. Baron was a thin, old, shrivelled-up walking corpse – so thin and so shrivelled it was as though there was not a drop of blood running in his veins. It was as if his bones were his flesh. He had a jutting chin, and a prominent nose, and with just a tiny amount of caricature from Rowlandson his profile would be a crescent moon.

To this appearance, Rowlandson added the traits of a cleric and schoolmaster called William Gilpin, famous for travelling around the country, and making notes about the picturesque scenes he encountered.  So, Rowlandson created a picturesque tour of his own, showing Syntax suffering all sorts of mishaps along the way: held up by thieves, chased by a bull, falling into a river. Rowlandson produced one or two pictures a month showing such misadventures, which were passed to Combe, who was then in debtors’ prison. Combe provided a poetic commentary, for publication in The Poetical Magazine.

Although plenty of cartoons had appeared before Dr Syntax, they mainly featured attacks on politicians and royalty. Syntax had three qualities which set him apart: he was a fictional being; he appeared in a series of adventures, not one-off pictures; and, above all, he was recognisable. Syntax was a genuine cartoon character.

And his success was colossal. You might say that London was gripped by a fever that only Dr Syntax could cure. And why not? War with France had weighed everyone down with care, every street had a veteran who had lost a leg or was missing an eye, everyone had a relative who had died on service. Yet still more men were called up, by insatiable recruitment posters on every hoarding. Wouldn’t you want to escape this misery? Wouldn’t you want a few minutes with some amusing coloured pictures? The result was that Dr Syntax was soon seen everywhere – and that crescent moon profile of the Reverend Ralph Baron enjoyed many new lives, in the form of spin-off Syntax merchandise, including  snuffboxes, dinnerplates and the carved handles of canes and swordsticks. There were even Dr Syntax chamberpots.

Stephen Jarvis is the author of the novel Death and Mr Pickwick. Expect to see more of his writing in the second issue of the Chapter Catcher…

Any cookies that may not be particularly necessary for the website to function and is used specifically to collect user personal data via analytics, ads, other embedded contents are termed as non-necessary cookies. It is mandatory to procure user consent prior to running these cookies on your website.